How do you understand the difference? In the last 30 years, more and more products, from proximity sensors to cell phones, carry an Ingress Protection or IP rating.  IP is the standard for environmental rating used by the International Electrotechnical Commission (IEC). As the name suggests, the IEC is an international organization which sets standards for electrical devices. In most cases the IP rating of a product is a two-digit code. The fist number represents the level of protection from ingress of solid objects, or dust. The second number represents protection from ingress of liquids. Table 1 explains what these numbers mean.

Here in the U.S. many of us are more familiar with enclosure ratings set down by the National Electrical Manufacturers Association (NEMA).  These ratings have also been adopted by Underwriters Laboratories (UL). NEMA ratings are a one- or two-digit number, sometimes followed by a letter. Table 2 gives an example of these ratings.

Taken by themselves, these standards are each easy to understand.  However, a problem sometimes arises when a specification for a project uses one standard, and a product under consideration for use on that project is rated by the other standard.

There is not a direct correlation between NEMA ratings and IP ratings, as the two systems are based on a different set of variables. However, Table 3 shows an approximate cross reference that can be used to help determine the IP number that meets or exceeds a particular NEMA rating. 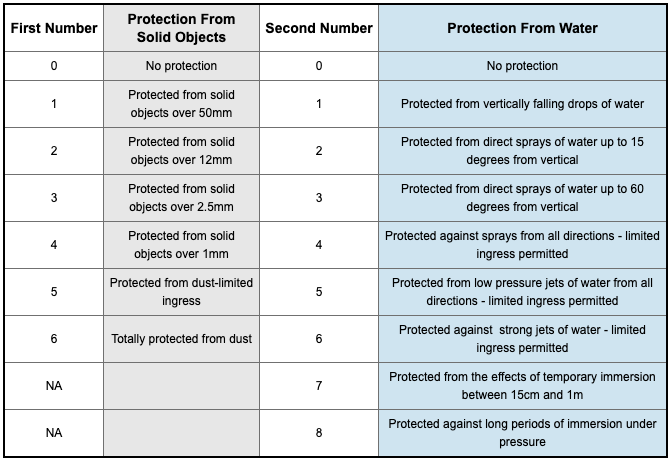 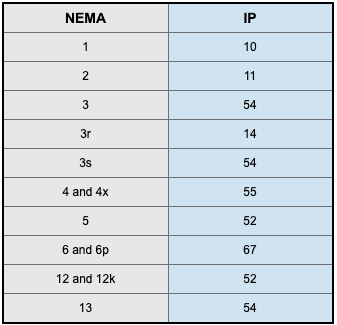